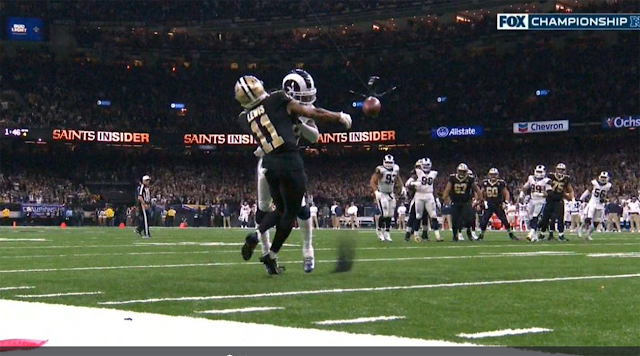 So last night's NFC Championship game was one for the books for all sorts of reasons.  But mostly because of a blatant infraction by the Rams against the Saints at a crucial time in the game when the Saints could likely have won the trophy.  Unfortunately, due to some clearly faulty officiating, the Saints did not get the chance.  According to nearly everyone who watched the game in the state of Louisiana (and many outside as well), the feeling is summed up in the photo below that appeared on the Causeway in New Orleans: 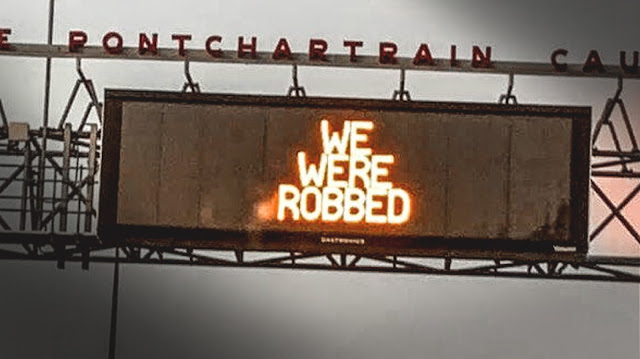 To be fair, the Rams played a strong game against the Saints.  But officiating has a critical part in whether a game is won honestly.  When officials don't carry out their duties with accuracy and fairness, they can sway the outcome of a game in ways that are damaging to the sport and the league.  Such is the case in the Rams vs. Saints championship game.  Those who watched are aghast at how egregious the penalty calling was carried out in the game.  Even early on when a helmet-to-helmet collision occurred and Saints Tight End Josh Hill stumbled off the field dazed, no call was made.  Ordinarily, that would've been a targeting call, and an ejection would have followed.  But later in the game an equally flagrant play occurred when Rams DB Nickell Robey-Coleman made contact with Saints Tommylee Lewis in what was an obvious pass interference call.  Yet, no call was made.  The NFL admitted it was a poor no-call.  Even Robey-Coleman admitted he did it.
With every Saints fan up in arms about this colossal failure by the refs to do their jobs credibly, I'd like to look at the larger idea of when we don't speak up in matters that are overtly wrong.  In not doing so, we are essentially condoning what is false.  That in turn makes us as guilty as the lie that's being told or perpetuated.  Whether a fan or not of the person or the situation or the person in the situation, what's right is right, and what's true is true.  There are times when we must be objective.  We cannot stand on the sidelines and allow patently false stories and acts to be told and accepted when we know the truth in the matter.  We must speak up and speak out even if we'll have to face jeers for doing so.  We know that everything that's popular isn't right.
Never allow a group mentality to dictate what you alone know is prudent.  Never allow fear to make you back down from shouting out the facts.  After all, if you were being maligned by an enemy in a story being circulated about you, wouldn't you want those who knew the truth to come forward on your behalf?  Their silence supports a lie.  Therefore, always work to protect your credibility.  Do the right thing.  Speak up and be fair.

How to Stop Interruptions in Conversations

September 27, 2019
So you're sitting in a meeting, and you begin to answer a question that has been directed toward you by your boss.  You get through about half of your response when a colleague jumps in and offers his take and essentially silences you.  There is evidence that if you are a woman, this will happen to you more often than if you are a man, and it's likely to happen to you by both genders.
Interruptions in communications like this happen all the time whether you're in a group offering your opinion or one-on-one sharing a story.  Regardless of the setting, we all find it annoying and rude.  These disruptions of dialogue hamper thought processes, contribute to misunderstandings, and devalue people's input.  So what do we do when they keep happening to us?  A few worthy suggestions can be found in Kathryn Vasel's article,  "Next time someone interrupts you in a meeting, try this".


But what if you're the one doing the interrupting?  I've cer…
1 comment
Read more