What It Means to Speak Truth to Power 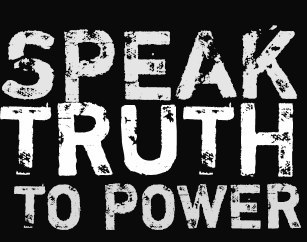 "Speaking truth to power" has become a common phrase to use when speaking about truth and/or power in a discussion that encourages courageous discourse on controversial matters.  It is an old phrase coined back in the 1950s by the Quakers and is defined as "a non-violent political tactic, employed by dissidents against the received wisdom or propaganda of governments they regard as oppressive, authoritarian or an ideocracy." (Wikipedia)
I've heard it overused in a lot of ways and not with a clear purpose in its meaning within the context of what was being spoken.  We latch onto certain words and phrases as language goes in and out of style on almost a monthly basis.  In this current generation, there seems to be a new word or phrase created daily and then abandoned when they become overused like worn out sneakers from last year's fall collection.  But words have staying power even if you get tired of hearing them.  They last even longer if they mean something significant.
Speaking truth to power means different things to different people.  Feel free to share what it means to you in the comments section below.  But remember this when you say it:  truth trumps power any day.  I would rather trust a man who has little or no power, than to distrust a man who is in power.
We've come to learn through too many awful experiences that speaking truth to the powerful can be costly.  Holding powerful, influential people accountable by calling them out on matters that they can impact is tricky.  Showing them their culpability in matters that are unfair, unjust, and immoral have gotten people fired, blackballed, and even killed.  That's why a big dose of courage is required.  To go against the grain, to be vocal when it is unpopular and to be willing to suffer the consequences takes a gut of steel.  For the brave people who do it every day, know this:  Regardless of what you lose, if you choose to stand on what is true and right and just, you have just asserted the power you possess.  Thus, if truth supersedes power when one must be considered above the other, then when all things are equal, truth is power.

January 21, 2019
So last night's NFC Championship game was one for the books for all sorts of reasons.  But mostly because of a blatant infraction by the Rams against the Saints at a crucial time in the game when the Saints could likely have won the trophy.  Unfortunately, due to some clearly faulty officiating, the Saints did not get the chance.  According to nearly everyone who watched the game in the state of Louisiana (and many outside as well), the feeling is summed up in the photo below that appeared on the Causeway in New Orleans:


To be fair, the Rams played a strong game against the Saints.  But officiating has a critical part in whether a game is won honestly.  When officials don't carry out their duties with accuracy and fairness, they can sway the outcome of a game in ways that are damaging to the sport and the league.  Such is the case in the Rams vs. Saints championship game.  Those who watched are aghast at how egregious the penalty calling was carried out in the gam…
Post a Comment
Read more

December 09, 2019
Trust seems to have gone missing these days in almost every aspect of society. The value of it in relationships has been taken for granted, and many people have a wait-and-see attitude about trusting others. There are those who say, "I'll trust you until you give me a reason not to", and there are others who say, "I'll trust you when you prove you're trustworthy." It takes a very long time to get people to a level of comfort where they can let their guard down and be less judgmental about a person's integrity. However, once trust is broken--and it can result from a single egregious act--it may never be restored. Even if it is, it's not likely to make it to full restoration. There's likely to be the barrier of a small amount of lingering doubt along with the memory of the pain felt from the betrayal.  So what needs to happen to weld together a new relationship. The old one has been damaged so something new must happen. Three …
Post a Comment
Read more